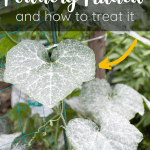 Your plants are growing well, producing fruit, and then you notice a white residue forming on some of the leaves. What could it be? You wonder. Powdery mildew is a common plant affliction that typically strikes late in the growing season. It looks just like its name indicates- white powder all over the plant. How can gardeners prevent powdery mildew, and once it’s appeared, how to treat powdery mildew? 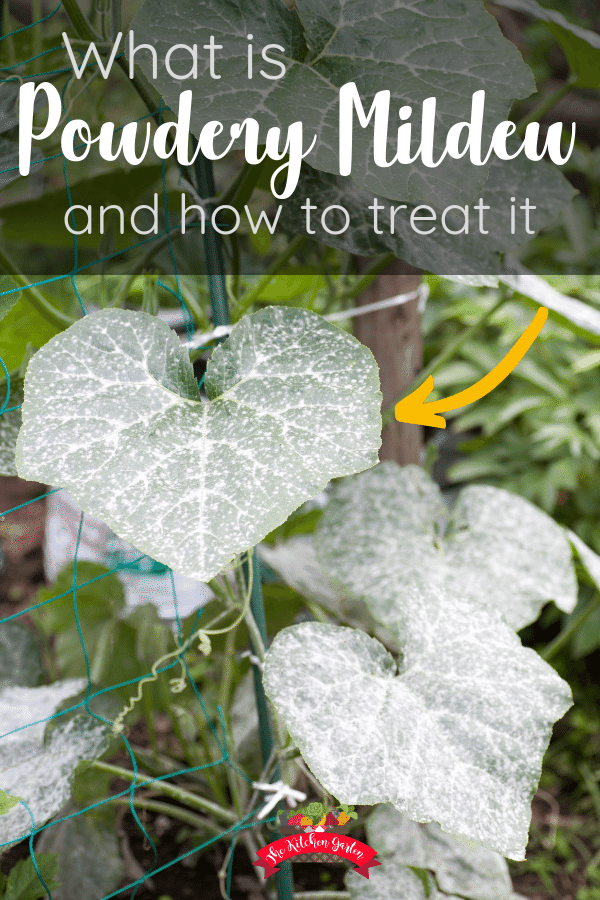 What is powdery mildew?

Powdery mildew starts on young plant leaves and looks like raised blisters that cause leaves to curl. Soon afterwards the plant will look like it has been dusted with white flour. Flower buds won’t open after this point and leaves will turn brown and drop. In my garden, cucumbers and zucchini tend to be the most susceptible to powdery mildew, but it’s certainly not limited to these plants.

Roses, zinnias, cucumbers, beans, squash, pumpkins, and tomatoes are also highly susceptible to powdery mildew. High humidity and low soil moisture set the stage for this fungal disease to attack plants. So, if you’re having a particularly hot summer with little rain, and you live in an area (like I do) with higher humidity, then you’re in a prime environment for powdery mildew. However, all is not lost.

There is hope for the plant if the disease is caught in time, and there are ways to prevent powdery mildew from attacking your plants.

Sunshine and air circulation are key in preventing powdery mildew from developing on plants. For larger, bushier plants such as zucchini, squash, and large tomato plants, this will mean pruning. Pruning back some of the leaves and their stems will ensure proper air flow and less chance of powdery mildew. (See my article on How to Prune Tomatoes.) MI Gardener also has a great video on pruning back zucchini to avoid powdery mildew.

Other methods to prevent powdery mildew is to keep soil evenly moist and water in the morning so moisture won’t remain on plant leaves for a prolonged period of time. I also try to avoid wetting the leaves if possible. Using a soaker hose system or hand watering at the base of plants can help significantly with this.

Use a slow release plant food to avoid excess nitrogen in the soil which can lead to excessive new growth on plants. Powdery mildew prefers to attack new plant growth instead of the older, tougher growth.

You can also wash foliage once a week to prevent powdery mildew by blasting it with a water hose to wash off any fungal spores that may be on the plant. Do this in the early morning so it will dry quickly in the sun.

An effective home remedy used as a preventative measure is homemade powdery mildew milk spray. This organic and simple recipe uses just milk and water. Create the milk spray with 40% milk and 60% water combined in a spray bottle and spray plant leaves every 2 weeks. 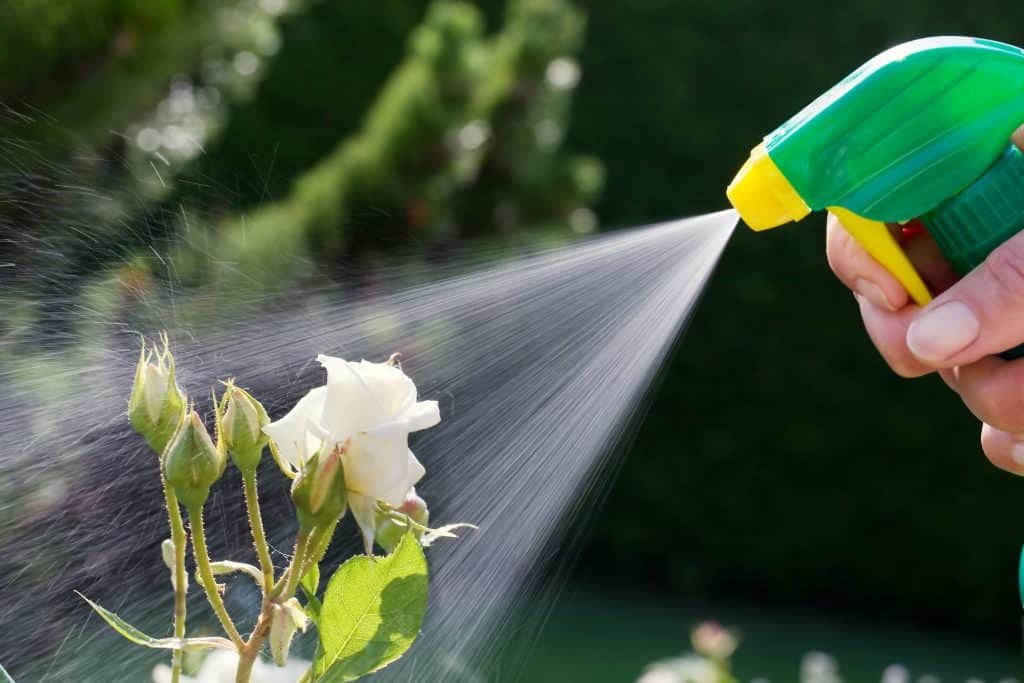 How to Treat Powdery Mildew

Knowing how to treat powdery mildew must begin at the first sign of infestation in order to save the plant. Begin by pruning off all diseased limbs and leaves. Dip pruning shears into a solution that is 9 parts water and 1 part liquid bleach between each pruning cut to disinfect snips and prevent disease spread. You certainly don’t want to spread the powdery mildew during the pruning process.

Dispose of all affected plant parts properly and clean debris off of soil. Don’t place the pruned leaves and limbs in your compost, instead throw them away.

Then apply a 2-inch layer of organic mulch on top of soil to prevent powdery mildew spores that may be in soil from splashing back onto plant during watering. This is also a good preventative to keep your soil moist and hopefully avoid powdery mildew altogether.

Finally, you could also spray plant with an organic fungicide mixed according to package directions. This may be the simplest route if you’d like to knock out the powdery mildew, but I would also do this in conjunction with pruning off affected leaves and stems.

Finally, powdery mildew spores over-winter in plant debris and evergreen leaves. Take some of the preventative precautions mentioned above if any of your plants have developed this fungal infection, odds are the spores are still lurking around. Knowing how to treat powdery mildew should make the next infestation of your plants easy to tackle, and preventative measures will hopefully reduce the chance of having it.

I’d love to know if you have any suggestions for getting rid of powdery mildew or preventing it. I’m always looking for new gardening tips and helps. Leave a comment below to let us know and have a great week. Happy Gardening! 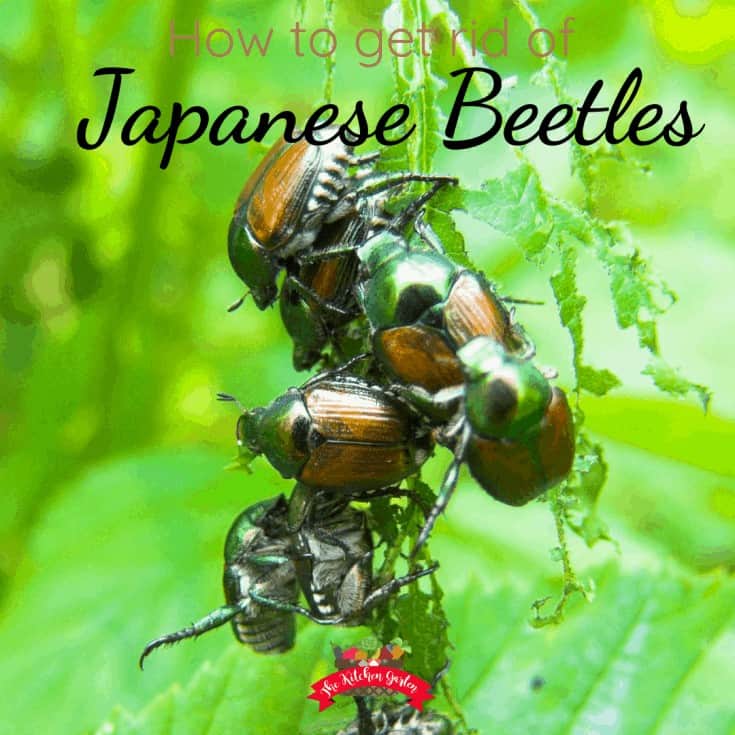 How to Get Rid of Japanese Beetles

Uses for Neem Oil in the Garden 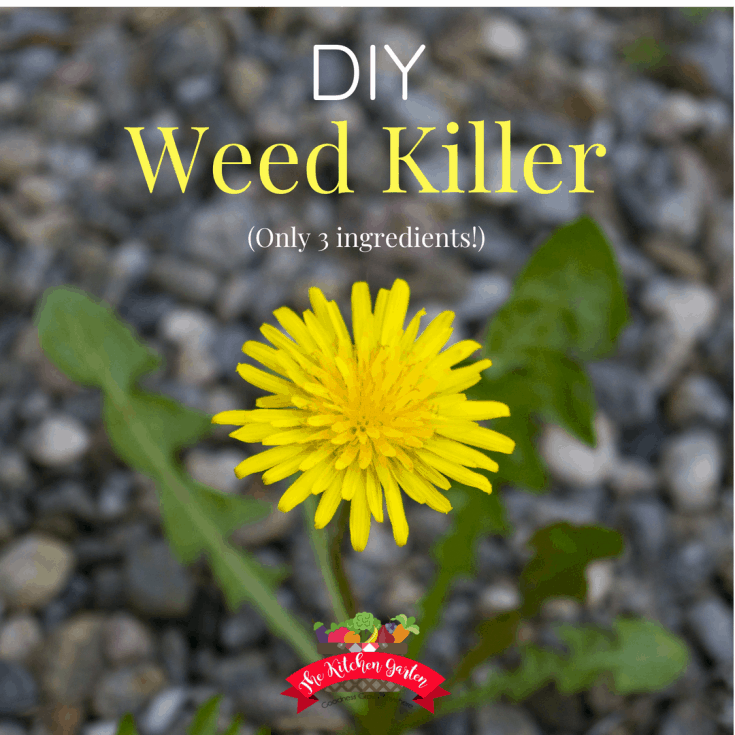 This DIY weed killer is simple to make with what you may already have at home. And this weed killer recipe won't put hazardous chemicals into your yard!

What do you do with affected plant leaves. I garden in a Community Garden. They want us to put them in the trash. I am against putting plant material in the trash. We have enough landfill problems. Any suggestions?

Hi Nancy! Great question, and I completely understand about not wanting to add to landfills. If what you're dealing with is powdery mildew, which spreads via the wind and dry conditions, then I think you'd be fine to break up the leaves and bury them. This should stop the spread and give the leaves a chance to break down. I'd avoid putting them into a compost bin just in case it's downy mildew or has another issue. Hope this helps!