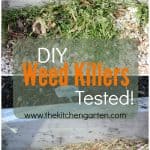 Weeds, the red-headed stepchild of the the plant family, are always popping up where they aren’t invited. And thanks to HGTV and Better Homes and Gardens, I now have this false idea that my yard should be pristine… no weeds! The reality of course is that weeds will grow, sometimes better than the plant you’ve been nurturing, watering, and pruning. That’s just life.

And while there are some creative ideas for trying to keep the weeds under control when you’re first planting a space, such as landscape fabric, newspaper, etc. Once you’re using a bed or path, it’s hard to get back down to dirt level and lay down a barrier to keep those pesky weeds from popping up.

If you’ve been on Pinterest, or living on this planet in the past ten years, then you’ll have noticed a pretty significant shift toward “greener living.” This includes a move away from commercial weed killers like Round Up. Now those spray weed killers from the hardware store certainly do the job, but they also can successfully kill surrounding plants. Then there’s the question of what chemicals are going into the ground. I’m not a scientist by any stretch of the imagination, but I have looked at the side of the bottle. There’s a whole lot there I cannot pronounce, so I’m going to say… it’s probably not good. And since your soil is a living thing, it’s best to take good care of it for the sake of all the things living there. (Learn more about improving your soil here!)

We are specifically having an issue with weeds in our raised bed garden paths. We’d lined them with landscape fabric before putting down pea gravel, but those determined weeds pushed through anyway. I actually wish I was as resilient as weeds, but no such luck. Testing out some these “natural” or DIY weed killers seemed like a good idea, so here are two that I put to the test in the garden area.

Both weed killer options were used in their test areas, and the “results” photos were taken a week after application.

Option 1: Vinegar/Salt/Soap Mix- While I didn’t love the fact that I was using some pretty acidic materials so close to my veggies, I was surprised and pleased with how quickly the weeds died. It only took two days for the weeds to turn completely brown.

Option 2: Boiling Water- I had my doubts whether “cooking” the weeds with boiling water (that’s essentially what it felt like) would actually kill them. When the boiling water was poured on them, they did turn a bright shade of green, like steaming kale. So you can imagine my surprise when I came outside after two days and found the test area looking like this:

There is a spot of green in the very corner, but I will say that my test area for the boiling water was smaller than the homemade weed killer… maybe I was doubting the outcome before I even started. But both DIY weed killers knocked out the weeds in the test area!

Now I feel like a legit scientist for taking this test essentially through the scientific method and sharing results and a conclusion. Bam! Well, while both options worked for my garden paths, I decided that because of the harsher ingredients in the vinegar/salt mix, I’d only use this on the patio, driveway, etc., or any place that I wasn’t intentionally trying to grow plants.

Be sure if you choose this option that you have a kettle to carry the water. I don’t think walking outside with a large pot of boiling water would be the safest choice, but a kettle with a lid is perfect and not too cumbersome.

I’d love to know if you’ve had success with any other DIY weed killers; I’m always looking for new ideas. Happy Gardening!

[…] If weeds start popping through, grab some boiling water and put them to rest (see more about that here). If the gravel level gets low (mainly because the kids love to play with it), you can simply buy […]

Hi I have creeping Charlie in my yard. Can you tell me how to kill these weeds? Thanks

Great question Jeanne! Creeping Charlie is a pretty big nuisance, but here's a great article on how to kill this weed specifically, and the secret is Borax. Check out the article here: http://www.gardensalive.com/product/creeping-charlie--the-lawn-weed-with-many-names/you_bet_your_garden

Epsom Salt is not a salt it is magnesium sulfate and is actually a useful nutrient for gardening. So how does it benefit in the removal of weeds?

Hi Mike, I wonder if it's the quantity of Epsom salt? And I believe the vinegar is doing most of the weed killing itself. Thanks for stopping by!

I found out by mistake that the boiling water trick was a great weed killer and it cost basically ZERO! We were BBQing hamburgers and hot dogs on the grill and on the side burner of the BBQ, I put a 5 quart pot of water to cook corn on the cob in. When the corn was done, I was looking around to where I could pour the boiling water, and I decided to pour it on the weeds between my patio blocks, and some big dandelions in the yard. The next day every weed and dandelions that got the hot water treatment were dead! and I was so stinking happy! 8-) It sure beats the $12 to $24 dollars per gallon of weed killer.

Instead of boiling water inside of your house and then carrying it outside, if you have a BBQ, then heat it up and put on your biggest pot filled with water.... use a lid, as that heats the water faster. Now your not heating up the house and you don't have to carry it outside. If you have a ladle, you can use that to dip into the hot water and then pour on the weeds.

This is such a great idea! I know most gas grills have the burner on the side now. Thanks for the tip!

I've tried the boiled water on my weeds and found it was best to do it on a sunny day so that the sun helps to fry the weeds. I found boiled water mixed with Dawn and vinegar worked well but since the area had more shade, it took a bit longer. The buggers will still come back - even though I have a special thin sort of tarp laid on top - still it's less tiring on the back! thanks for reminding me it's time to burn those buggers!

Yes, and I remember thinking sunny days were best back when we were using Round Up also; maybe it helps dry up the weed? Thanks for stopping by!