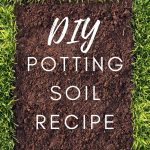 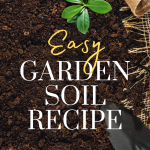 Oh, potting soil. What a variety of mixes and uses we see available at the hardware and landscape store. And if you’ve been in the market for potting soil lately, then you know that it certainly is NOT cheap.

Many of the bags of pre-made soil are also only 1-2 cubic feet, and that won’t fill a garden bed or too many large pots. Here’s a quick recipe for homemade potting soil for you DIY gardeners out there!

I’ve been mixing up my own potting soil recipe for the past year or so, and DIY potting soil isn’t nearly as intimidating as it sounds. In fact, there are plenty of ways to do it. I first began using the potting soil recipe from Mel Bartholemew’s book The New Square Foot Gardening. His recipe is very simple, and this helped me to get my footing. Now that I know a little more about available ingredients, I’ve branched out a bit.

And if you’re interested in only using sustainable, local materials for your DIY potting soil recipe, then see my tips at the bottom of the post.

For many of the potting mixes found at the store, even the popular green bag offering “miracles,” they include a mix of traditional potting mix ingredients: perlite, peat moss, compost, and fertilizer. But the unknown elements listed, such as “wetting agents” and “forest products” make me wary.

And since mixing up my own potting soil is simple and easy, I’ll skip the mystery ingredients and stick to the basics. Here are the primary components of my potting soil recipe:

Peat Moss/Coconut Coir- Peat moss comes from peat bogs (primarily found in Canada) where moss and other materials decompose. This decomposed moss is then harvested and packaged for use by gardeners all over the US and Canada. I have recently read articles about the environmental impact of peat moss harvesting being called into question.

Because of this, some gardeners have been making the switch from peat moss to coconut coir. Coconut coir is a product produced from the coarse fibers on the outside of coconut shells. The coir comes in dense blocks that once moistened will expand. Both peat and coco coir are soil amendments that retain moisture, so they’re excellent for use in gardens and potting mixes.

Perlite/Vermiculite– The names sound a little intimidating, but if you’ve ever purchased pre-made potting mix then you’ve probably seen the white perlite chunks in the mix. Perlite is volcanic glass heated to an extremely high temperature. Once heated, it expands and pops into smaller pieces upon cooling.

The small pieces are incredibly lightweight and help to retain moisture and nutrients for plants to use. Vermiculite forms from a group of minerals that, like perlite, are heated to high temperatures. The high heat creates long strands that are then broken up into various granular degrees (coarse, fine). And like perlite, it retains moisture well, so it’s commonly used by gardeners.

Which to use? Perlite drains more effectively than vermiculite, so if you live in an area that gets plenty of rain, especially in the summer, this would be the choice for you. I live in the southeast, which can have dry spells throughout the summer, so I choose vermiculite.

Compost– Compost is pretty self explanatory, and it can come from what you’ve composted yourself or from bags purchased at the store. (Want to try composting?) I like to have a variety of composted materials, so I typically use some of my own compost and a bag or two of Black Kow compost.

Decomposed organic matter, compost gives your plants a rich nutrient source. What many gardeners compost will primarily contain broken down veggies, lawn clippings, and paper. What can be purchased at the store may include composted manure, and since we don’t have cows or chickens, I’ll purchase a bit to throw in my potting soil recipe.

How to Mix Your Own Potting Soil

I typically use equal parts peat moss, vermiculite, and compost. There are lots of variations out there that use these same three ingredients but in different ratios. And I can tell you there is grace in how much of each ingredient to use. You certainly won’t kill your plants if you use more peat moss than compost, etc.

If you’re creating a small batch of potting soil, use a large rubber tub (with a lid). Place all of your ingredients in the bin and mix well. If your peat/coir is dry and dusty, use a spray or two of water to keep the dust to a minimum. Your potting soil will then be ready for use whenever you need it!

For filling a raised bed, I simply place all of my ingredients in the raised bed itself. Then using a garden hoe or bow rake, I’ll mix the potting soil recipe right in the bed.

Whether in a container or in a raised bed, this potting mix should last for years. I may add in a bit more compost each spring to give it a nutrient boost, and/or I direct compost toward the end of the fall to keep the soil rich.

If you’re looking to create your own potting soil at home, and you want your materials to all be locally sourced (i.e. not from Canadian peat bogs or from volcanic rock… no volcanoes near you), then here are some ideas:

Have you tried mixing your own potting soil? I’d love to know what you’ve tried and what has worked for you. Have a great week and happy gardening!

I’m new at container gardening and I bought cow manure compost for my pots instead of potting soil. Do you think it should be fine? The soil is not as heavy as garden soil and it seems fast draining

Hi Komal! Great question. I wouldn't advise planting in pure cow manure compost. What you can do is buy some cheaper bagged soil and mix it with your compost about 50/50. Or even better, add a little sand into the soil/compost mix as well if you have some on hand. I hope this helps!

We save tea leaves, coffee grounds, eggs shells (grind them into almost a powder), I chop mushroom stems into small pieces and dry them in the dehydrator then grind them in the spice grinder. I then dump all into a small bag of seed starting soil and top soil. I mix egg shell powder into the top few inches in the garden where I will plant my tomatoes. Sometimes I buy some worm waste to add to the mixture. I start my seeds indoors using this mixture and after I have planted all the seeds indoors, I add a handful of the mixture into the hole where I plant the direct sow seeds.

What a great idea, Barbara! Thank you for sharing!

Hi, thank you for sharing your knowledge and experience! I’m in Anchorage, AK, trying my best at vegetable gardening. Question: How can I reuse Costco’s organic garden/potting soil year after year that are in my flower containers? Can I add that to my homemade dirt mixture you outlined above?

Hi Sasha! What a great question. For my old potting soil, I usually put it in with the compost. Container soil can be very depleted, but if you added it into homemade potting soil, that might work; I would just be sure to add in some worm castings or natural fertilizer to give it a boost. Hope that helps!

When you use equal amounts of these ingredients is it my weight or volume?

Great question, Elizabeth! I believe it's by volume. And in all honesty... I usually eyeball it as I add it all together. :)

I used top soil peat moss and petite. My veggies were dying until I did this mix and re planted them in it. They are thriving so beautifuly. I couldn’t find vermiculite at my local Walmart and I knew a should’ve bought it at another Walmart when I finally found it but I didn’t have my wallet with me. I would’ve added that the the mix but there’s always next year. That and some other stuff I’ve learned about. Rock powder, coco cior, and fish poop water. Also I don’t know if anyone else does this but i throw worms in my garden bed when I find any. I’m planning on building worm towers too.

Absolutely, there's always next year! I didn't have vermiculite or perlite for several years. And I love tossing worms in my garden beds when I find them in the yard. You can also direct compost into your garden beds to keep them nutrient rich. Thanks for stopping by!