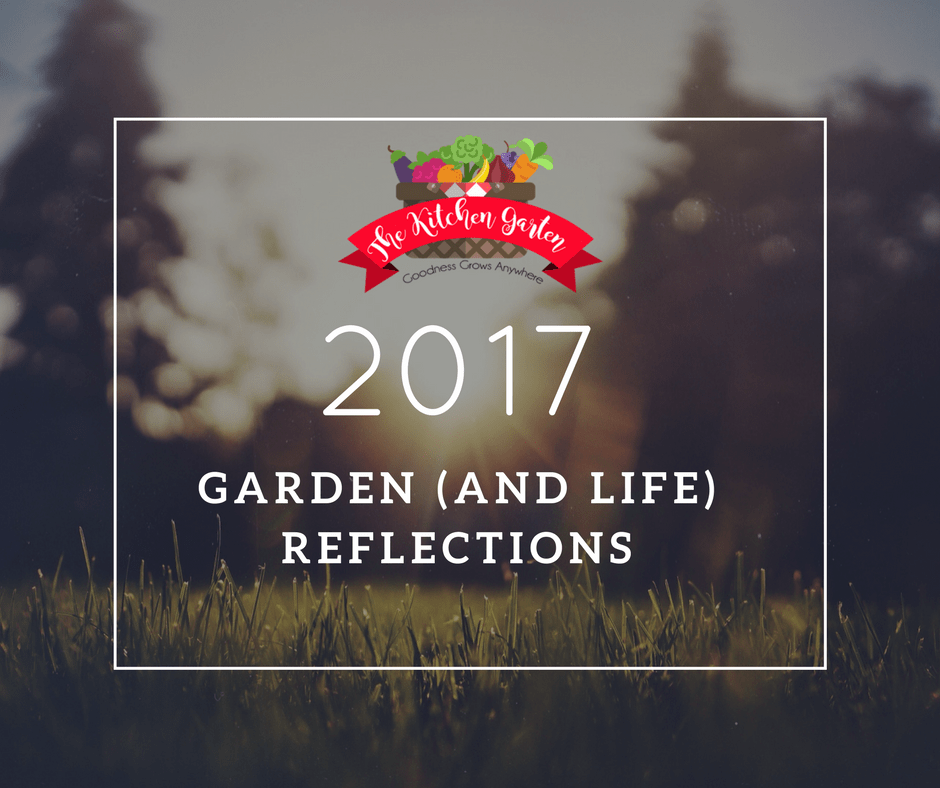 2017 feels like one of the longest years I’ve experienced in a while. Though each year holds the same number of hours, days, and weeks, the combination of joy and sorrow in this particular year has made the days and the year long. In this bit of space I write in weekly, I don’t usually share many personal stories or happenings. This could be partly due to the fact that I assume most of you want to hear about gardening, not my personal life. But at the same time, our lives are all made up of a collection of experiences, each weaving their way into the fabric of our personality and being. So while I will reflect on my gardening year, I’ll also share some about personal experiences 2017 brought my way.

Lessons from the 2017 Garden

This was a very productive garden year, and we added two new raised beds, so that may have had something to do with it. But here are my take aways from our 2017 garden:

While my ant troubles are probably not this big, they’re still pretty annoying when they make a feast of my garden goodies.

A Tough Year for Animals

We started 2017 with two dogs and two hens. Our pups Samson, a 12-year-old alpha male maltese, and Noel an 11-year-old shepherd mix kept the squirrels at bay in the garden. We’d had them both from the time they were tiny puppies, and they were our children before the little gardeners arrived.

Our veterinarian had expressed some concern over Samson’s health in the winter of 2016, but x-rays and blood tests all showed that he was healthy… for an older dog. Our girly gardener has a March birthday, and low and behold, on her birthday, Samson had a massive seizure. Though I rushed him to the vet, he just couldn’t recover. He was my first dog to own as an adult (a college graduation gift from my aunt), and the suddenness of his passing shocked me. I kept his bed in place next to my side of the bed for several months afterwards. I’m not usually a sentimental person, but I just didn’t have the heart to throw it away.

Our shepherd mix, Noel, always spry and lively, slowly began to decline after this. She was noticeably depressed for several weeks afterwards, and since she and Samson had been together for so many years, we expected this.  Though not connected to her sadness, she lost her hearing in the early summer and developed cataracts that severely limited her eyesight. As you can imagine, her deafness and blindness were a hinderance to her quality of life, and on top of all of this, she showed signs of canine cognitive dysfunction (ccd). If you’ve never seen this in action, some of the symptoms include walking into corners and being unable to “get out.” Getting stuck behind pieces of furniture or other items that were never a problem before.

While all of this was going on with Noel, we had purchased four chicks from our local hardware store. We already had two hens (Copper and Cocoa), and there was plenty of room in the coop for more gals, so why not?! The kids were super excited, and though I was nervous about eventually introducing our hens to these newer chicks, I wanted a larger backyard flock. You can probably see where this story is going… One afternoon I stood up from my desk and noticed a dog in the hen’s coop enclosure. Not our dog. I won’t go into details, but neither of our hens survived the encounter.

Thankfully, the chicks were in a separate coop. We’d bought a small pre-fab coop from a local store, and it was the perfect size for the now 12-week old chicks. Four days after the dog incident, we lost all of our chicks. No joke; I couldn’t make this stuff up. Our smallest gardener had woke us up at 3am that morning, which was unusual. While I was putting him back to bed, I clearly heard a fox calling. (Cue song “What Does the Fox Say?”) Well, a fox call is pretty distinct, but I didn’t think anything of it, because our chicks were fully enclosed and locked up.

Early the next morning I was pouring a cup of coffee and looked out the window to the backyard. The side of the chicks’ coop was completely torn off and laying in the middle of the yard. Pine shavings, which had lined the nesting box, were strewn everywhere, and the chicks were gone. Not a trace was left. I know about the circle of life and animal instincts, but I just wished it wouldn’t happen in our yard. Sheesh!

In the late summer, we adopted a younger dog from a local shelter, hoping this would help our aging Noel, but she continued a downward progression. She passed away in late August, and I told my husband that this clearly was not our year… at least where animals were concerned.

In the grand scheme, I know our dogs had lived long and pretty pampered lives. For that, I am thankful. And after watching a few Youtube videos of foxes caught on wildlife cameras, I have a new appreciation for how aggressive and determined they can be when they’re hungry. So, I certainly have some ideas for how to reinforce our coop for the coming spring. (If you want to see foxes in action, search for fox videos on Youtube, wow!)

Our newly adopted pup, Olive, has adjusted well to life with us. Our smallest gardener greets (i.e. hugs and loves on) her most mornings before any of the rest of us. She’s quite the digger, much to my dismay; I even found one of her bones in a raised bed I was direct composting last week. I’m sure that we’ll soon adopt another one, because I like for dogs to have a pack mate. Hopefully this will keep her entertained so there are less potholes in the yard.

So while reflecting on this year was certainly bittersweet, it was actually a bit therapeutic to write it all down. Perhaps you will find the same relief in considering your 2017 year, the joyous and the painful.

I am excited for what 2018 will hold; it will be here before you know it!

And if anyone has any suggestions about keeping ants at bay, I’d love to hear them! Happy Gardening!

Don’t forget! Basil: From Seed to Table is now available, as well as sweet garden themed t-shirts for the whole family! Check it all out in The Kitchen Garten Shop.

I am so sorry for your losses this year. How devastating. Our dogs especially are a part of the family. My oldest is getting up there in years and I am dreading the day she leaves us. Wishing you all good things in 2018.

Thank you, Monica! Pets certainly do become part of the family, and they bring such joy!